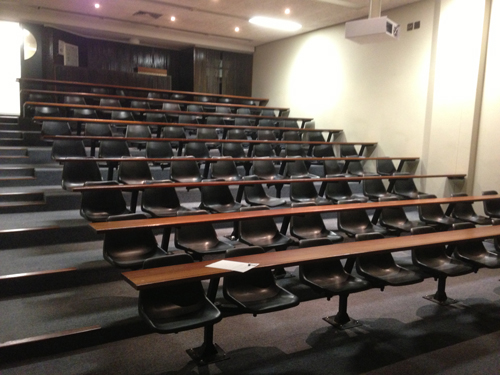 Teaching anxiety, like corn, tomatoes and zucchini, is at its peak across the land in August. It is more than dread of the new academic year, more than the realization that a summer of research and relaxation is over. It is the fear felt by professors old and young that they cannot teach, and that this time they will be found out. Some never experience the anxiety, some just claim they don’t. Some have it only at the beginning of their careers. Some, no matter how distinguished, suffer throughout their working lives.

I discovered the seasonal aspect of teaching anxiety 13 years ago. I’d already taught for several years, on the whole successfully. Now, as a new Ph.D. in Classics, I was about to start my first tenure-track job. Everything was great until August. That’s when I began tempting my friends to homicide, insisting that because I had taught only Latin before, I didn’t know enough to teach beginning ancient Greek — even though I had just finished a dissertation on a Greek author, and had been hired partly on the strength of my Greek and on my successful teaching experience. I didn’t add that I had convinced myself that my inability to teach meant that I’d have to spend all my time preparing for class, hence would never publish, hence would be fired. Nor did I share with them the nightmares in which nameless students laughed and pointed.

Surprise: At the end of the first semester, none of my students’ evaluations read worse than “Less ‘sink or swim’ attitude, please.” No one found me out (it being difficult to find out something that isn’t true), I had time to extract one article from my dissertation and they didn’t fire me.

So I thought that my fear was just part of being a novice. Then, the next August, a friend with an international reputation and 25 years of teaching experience called me to announce that he absolutely could not take up the prestigious appointment he had been offered (and had accepted). Why? He was unable to conjugate off the top of his head a common but highly irregular Greek verb, and fear of being caught was keeping him up nights.

Once I learned that other, older colleagues had teaching anxiety too, I began to see it everywhere. I noticed that a friend in another department, a winner of national teaching awards, grew unnaturally pale and silent during the weeks before classes, when he spent as much time in the men’s room as he did preparing lectures. Every August, their track records of publications and years of positive student evaluations suddenly seemed a sham, a mirage, a barely opaque veneer over something far worse than emptiness: delusion.

It’s not just the humanities mind that cracks — scientists suffer this anxiety, too. A friend at Princeton told me of a Nobel Prize-winning colleague who feels compelled to look up basic information in his field before classes begin each year.

The most telling words for me in this case are “basic information” — teaching anxiety relieves professors of the most fundamental facts. The house of knowledge in which one normally dwells still has its custom bookcases, ceramic-tile fireplace and recessed lighting fixtures, but the floors are gone, the pipes have burst and the walls weren’t wired according to code. It’s a nightmare.

In fact, nightmares are the most common manifestation of the anxiety: You walk into a classroom unprepared; you walk in naked; you can’t find the classroom; you can’t talk; your students question your authority, your colleagues chastise you in front of your students. And these are mere run-of-the-diploma-mill dreams. I know some real doozies. An archaeologist dreams that before class, her carefully arranged slide trays drop on the floor, upside-down. A historian, in his dream, sees only the students’ hair, never their eyes or the rest of their faces. In one of mine, the clothes and personal effects of failed teachers (primarily mine) are being sold on the department chairman’s lawn by his brisk and cheerful wife.

This is not to say that all anxiety about teaching is based on neurotic fantasies — teaching is a genuinely scary business. All eyes are on the professor, who has lots of knowledge but often no training in how to convey it. Take my first time in front of a class. Please.

As a 23-year-old graduate student, I faced 45 undergraduates who had signed up for a word-building course based on the study of Latin and Greek vocabulary. Prior to my arrival, the course had been taught by a kindly professor emeritus who read to the students from the textbook and gave at least a B to anybody who showed up on test days. Cut-throat pre-meds (the front two rows), the football and lacrosse teams (the back two rows) and anyone else whose GPA needed a boost (all the rows in between) loved this famous gut. But as I talked about required attendance, required homework, weekly quizzes and exams, the students realized that things had changed.

The almost palpable waves of antagonism, the angry muttering and the dark looks coming my way sent me into panic. My adrenal system went on full alert. I tried to take a sip of water, but my whole arm shook so much I couldn’t lift my glass. I decided to begin teaching the first chapter of the textbook.

I forgot Latin. The first examples I wrote on the board — the words for good, better, best — were flat-out wrong. One of the front-row pre-meds raised his hand. “That’s not what it says in the book,” he smirked. I checked, acknowledged that he was right, erased the board and took a deep breath. “I guess I’m really nervous,” I said. One nice woman broke rank and gave me an encouraging wink, which made me feel both grateful and many years her junior.

That was 20 years ago, and short of a major head injury there is no way that I could have an experience like that again. Yet seasonal teaching anxiety seems incurable. It’s such a habit that I feel it even when I’m taking a semester off.

Perhaps it’s related to the time of year, a psychic remnant of what ornithologists call pre-migration restlessness: an animal sense that as autumn approaches we need to shake off our summer indolence and prepare for winter. Perhaps it is the adrenaline boost athletes say they feel before competition. A friend who teaches writing came up with the most original, and the sweetest, explanation I’ve heard — that the chemistry of teaching anxiety is not unlike the chemistry of love. The turbulence and agitation, reminiscent of the first uncertain days of infatuation, are simply signs of readiness to attach to yet another set of students.

Still, sweet explanations scarcely ease the fear — it’s a fear based in the fundamentally nerve-wracking business of showmanship. But public performance notwithstanding, teaching is also a private enterprise. Ultimately the show is an exclusive one, with a limited and captive audience. It’s for this reason that I feel like a voyeur when I watch a friend teach, standing outside her classroom just out of her view. Invariably, she appears collected, totally present. She shows no sign that her mind has gone blank when a student asks what year such-and-such took place. Not at all like me, in other words. But then, I can’t see me; without input from fellow teachers, you just can’t tell how calm or crazed you look.

The go-it-alone structure of academia isn’t likely to change. In lieu of receiving reassurance from colleagues, all that teaching anxiety sufferers can do is wait for the worst of the feeling to pass. Or else be comforted by truisms about how much they know compared to their students. Here’s one of my favorites, in the form of a joke told to me by my 8-year-old:
What do you need to know to teach a dog tricks?

You need to know more than the dog.

Since I know more than any dog who’s ever likely to walk into my classroom, why should I be nervous?

On the other hand, they can smell fear.

Elizabeth Bobrick teaches classics part time at Wesleyan University and works as a freelance writer. Her nonfiction, fiction and scholarly writing has appeared in national magazines and journals.