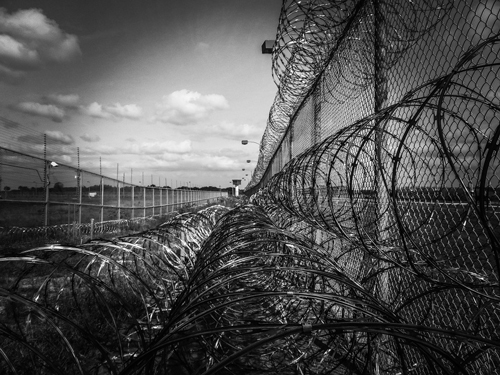 At the entrance of the maximum security prison where I taught Greek tragedy was a wooden plaque in the shape of a shield. It was emblazoned with a motto: Non sum qualis eram. Apart from its incongruity in this place of no Latin and less Greek, the motto struck me as equally a declaration of failure and of hope. The men inside were not what they once were. What were they now?

I knew very little about my students at Cheshire Correctional Institute. I’d been told that over 100 inmates had applied to take classes through Wesleyan University’s Center for Prison Education (CPE).* Only eighteen had been accepted after tests and interviews with Wesleyan faculty members, CPE staff, and prison administrators. The men had widely differing educational backgrounds, but had proved that they could succeed at Wesleyan course work: biochemistry, essay writing, sociology, and philosophy. By the second year of the pilot program, 2011, when I taught, the cohort had lost only two. Of the remaining sixteen, thirteen were African-American.

I’d been told that most of the men were serving long sentences for violent crimes. I didn’t ask for the particulars of who had done what. I would learn some details later, but for now that was enough. I wanted to think of them as students first and prisoners second.

All well and good, but that they were prisoners was both impossible and pointless to ignore. I was escorted through nine locked gates and doors to my classroom, where a guard watched outside. The men wore identical beige scrubs with immaculate white t-shirts underneath. They ranged in age from early 20s to mid 50s. They wore their hair in cornrows, or buzz cuts, or dreds. Even so, after the first four classes I was still confusing their names—Mr. Morris with Mr. Grey, and so on.§ I was embarrassed. When I apologized, one of them said, “That’s the idea, with the uniforms and all. It works. They don’t want us to stand out as individuals. We’re numbers here, not names.”

That response was typical of their courtesy, humor, and remarkable ease with me. Still, I was a bit worried that the atmosphere would become more heavily charged once we got past the Oresteia and into dramas of the individual. Ajax was next on the syllabus. How would they respond? After all, weren’t their lives the stuff of Greek tragedy violence, suffering, punishment, misfortunes of birth, crushing regret?

I’d emphasized that the tragedies were not just entertainment, although the performances were assuredly spectacular. When we read the Oresteia, I’d talked about tragedy’s civic function as a representation of broken societies and ruling families. When we’d finished Eumenides, and Ajax was up next, one student asked, “What is the relevance of this play to what we’ve been talking about?”

Because we were out of time, and the guard was waiting to walk them back to their cells, I gave a pared-down answer. “It’s about a man who was very powerful in his community, but then was deeply disrespected. He did something terrible in revenge. He didn’t get away with it. His enemies were happy, and their desire for revenge had to be dealt with before everything spun out of control.”

The room went momentarily silent. Those silences—and there were others—told me when something had hit home.

Ajax resonated deeply with the men, but not in the way I had imagined. Interestingly, they had little sympathy for the wronged hero. Unlike typical undergraduates, my students were not impressed by the heroic way of dealing with obstacles. A number of the men were serving 20 years to life for murder. Killing someone because they disrespected you; because they were physically in your way and wouldn’t back down; committing any number of outrages so that others would be afraid of you—this was a life they knew. They’d done these things, or seen them done.

My students focused instead on the chorus and on Ajax’s “spear-won bride,” Tecmessa. They scorned Ajax’s overwhelming concern with his lost honor, because it made him blind to the pleas of those who relied on him for survival. The students were clearly moved by the panic of Tecmessa and the chorus. Ajax’s choice to leave them to face his enemies without his protection struck a chord.

I had never read the chorus’ initial response to Ajax’s threat of suicide as anything but standard issue woe-is-me. But the men saw it as deeply revelatory of Ajax’s character. His suicide was the ultimate mark of hubris to which big men fall prey: they ignore the innocents they leave behind, the family and community, who will suffer because of their disregard for everything but status.

One of the men slammed the book on his desk. I was startled, because he was one of the most gentle in demeanor. “They ought to teach this in schools. Every one of us has had a woman begging us not to do something all our lives, but we didn’t listen, and here we are.” Another silence.

Needless to say, I’d never read the plays with students whose lives turned on the outcome of trials. Reading the Oresteia with this group, in particular the Eumenides, was a revelation. Although most of my students were in for murder, many were involved in appeals regarding the lengths of sentences, or serving out their terms at prisons that were not maximum security. They knew a trial when they saw one, even in ancient and mysterious garb, and they read it like the experts they were.

At one point I asked the class what they made of Apollo’s argument that the female was simply a vessel for the male seed. “Oh, you know, lawyers,” shrugged one of the men, a former gang leader, in for felony murder. “They have to pull out whatever they can for their guy.” It was funny, but it was insightful as well. Apollo had a weak case. He was playing the misogyny card. He only managed to convince half the Athenian jury on stage, even though they knew they were voting against Athena herself, and none of them would have been fans of husband-killing women. Euripides’ plays were the most troubling to the men and the hardest for them to relate to. These criminals believed passionately in justice and in the personal and political significance of suffering.

Euripides presents a world in which justice was perverted, at best, if not completely meaningless. Human suffering was depicted in painful detail; divine indifference was complete. For example, the men were horrified by the punishment visited upon Cadmus in the Bacchae . What purpose did it serve? What had the old man done wrong? The nihilistic universe of Helen shocked them too: the deaths of countless warriors and, as we say now, non-combatants, all because of a divine shell game.

Our class was not just a discussion group in which the students shared their responses to the readings. They had to take exams of the same difficulty as those assigned to Wesleyan students. These panicked even the most confident. A bad grade might lead to having a professor think less of you. More than one bad grade might lead to getting kicked out. Poor performance would make the entire program look bad, and then it would be closed down.

I couldn’t calm them down. I finally realized that it was the men’s work to face their anxieties. This was part of being a student: do your best and hope for the best.† But their lives had shown them that it was foolish to assume that things would turn out okay. Statements that might not meet with approval from the authorities were dangerous.

Things came to a head one day in class. We had a lengthy take-home test coming up. I was trying to move away from time-consuming, anxious questions and back to the play we were reading. “You’ll do fine,” I said. “The stakes are not that high. Tests are only part of your grade.” One of the men, an excellent writer who had done beautifully on his papers so far, all but exploded. It was the first time anyone had raised his voice in class. “You all don’t understand, you and the TAs. It’s not the same for us as it is for the Wesleyan kids. The stakes are  high. I send every one of my papers and tests to my 19- year-old son. I want him to see what I am doing. I need to do well, so that he can see that he can do it too, that he doesn’t have to do what I did. I want him to stay in school.” The class looked at me apprehensively. I did my best to acknowledge that I had heard him, and then steered us back to the play.

This man and I got to talk privately, later. (“Privately” in a prison means standing in a corner of a crowded room, out of earshot.) He apologized for raising his voice; I apologized for seeming to make light of his concerns. “I am just so frustrated,” he said. There was no point in my saying that I understood, because I could never understand.

Most of us go into teaching believing that education will change our students’ lives. But few of us imagine that they will use what they learn in our classrooms to save their children from repeating their mistakes. We don’t think that a student will ever say to us, as one did to me, “This is the one place where I feel really human.”

I have no idea how these intelligent, and, in many cases, deeply religious men had ever been capable of what they had done. How had they transformed themselves? “Becoming humble” or “achieving humility” were phrases the men used often when discussing the tragedies. Perhaps there was another interpretation of the prison’s motto, non sum qualis eram: I have changed. I have become humble.

Once my students asked me if I was scared, coming into a prison. “Of you all? Nah, come on.” I said. They laughed. “But why do you even want to come into this place?” one persisted. “It’s a nightmare.”

Of course, it wasn’t a nightmare for me. I got to leave. But why did I want to come in? Because in the prison, I learned how powerful education could be. I’d lost sight of that, in the years I spent teaching more privileged students. With the men, I saw what it was like not to have an education, and to want it enough to risk failure and humiliation. When I left each class, having taken questions from every direction at top speed about everything I knew, I was equally exhausted and exhilarated. I remembered why I wanted to become a professor in the first place, when I was 18 and decided to major in Classics. The men at Cheshire gave me a renewed awareness of why we continue to read the dead white men’s plays, and I continue to marvel at how these masterpieces show themselves differently to every reader. Non sum qualis eram.

* I taught in 2010, in the early days of Wesleyan University’s Center for Prison Education, part of the Consortium for the Liberal Arts in Prison at Bard College, go to www.wesleyan.edu/cpe . Since then, the number of participants and course offerings has doubled, and the program has extended to York Correctional Institution for Women.

§ These are pseudonyms, not the real names of any student in my class.

† Unfortunately, I’m unable to give examples of the high quality of their work. Connecticut’s Department of Correction regulations bar me from publishing any inmate’s work.

Published in Amphora, A publication of the American Philological Association, Vol. 11 • Issue 1 • Spring 2014

View a pdf of The Stakes are High: Tragedy and Transformation within Prison Walls